What’s “Pura Vida” All About?

If you’ve heard of Costa Rica, you’ve most likely heard the term “pura vida”. Pura vida is Costa Rica’s slogan, and directly translates to “pure life” in English. However, like many literal translations, it’s not actually the most accurate English explanation. To Costa Ricans, it means much more.

It is the widespread belief that the phrase “pura vida” comes from a 1956 movie of the same name. After the movie’s release, “pura vida” became popular as a greeting, a toast, and as a goodbye. Since then, it has blossomed to become the spirit and culture of the country.

Costa Rica is a full of beauty, biodiversity, and culture. The term “pura vida” defines the laidback, easygoing way in which many Costa Ricans live life to the fullest. It has grown to represent many Costa Ricans’ pride in their culture and landscape. Now, it is used not just as a salutation, but is interchangeable with many different phrases, from “doing well” to “that’s life”. Costa Ricans tend to say it at sporting events, festivals, celebrations, and, of course, in day-to-day life.

We look forward to greeting you in Costa Rica someday soon. Until then – pura vida! 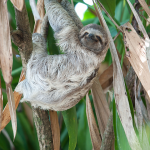 Sloths Don’t Do Anything Quickly!Community News, The Sloth Institute